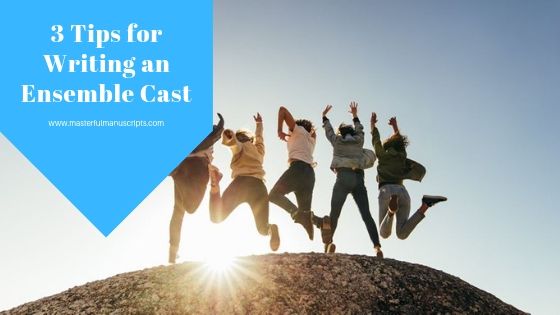 I personally really enjoy an ensemble cast in a story, and they get bonus points in my book if they’re pushed together by circumstances rather than by choice. One of my favorite things about the first Guardians of the Galaxy movie is seeing how the Guardians come together and how utterly dysfunctional they are in the beginning.

The question is: how do we write such dynamic groupings in our own work? How do we engage our readers with mismatched casts without just annoying them or coming up short?

1. Flesh out the characters as individuals

The foundation of a good cast is well-developed characters. You can’t just create characters for a group; they have to be strong characters in their own right first, with their own goals, motivations, backstories, and biases. Flat characters aren’t engaging individually or as part of a group, so make sure your base characters are deep and well-rounded.

Whether it’s their personalities, their goals, or their motivations, your characters within the ensemble cast should always be different and unique, and if they can clash and cause conflict that’s even better. Maybe you have a really brooding character who can’t stand the really peppy morale officer of the group. Maybe all of your characters want the same thing, but their motivations are vastly different and cause conflict. Or maybe they have conflicting goals but they all have to get to the same place and it’s most efficient to travel together. Maybe it’s some combination.

In Guardians of the Galaxy, we start off with two parties in pursuit of an orb, but with different motivations, and someone in pursuit of one of the first two parties. They all end up in a tussle and stuck in the same place, where their goals temporarily align and they have to work together to achieve their shared goal. But they really don’t like each other, their ultimate goals still clash, and thus there’s a lot of conflict born of them being stuck together.

You don’t want your characters to all get along, of course, because then there’s little conflict and that’s kind of boring. But you don’t want them to be always at each other’s throats, either, or your reader will get frustrated and the character relationships will cease to be enjoyable. So while you want your characters to have differences and conflicting personalities or goals or whatever, you also want to give them common ground. Maybe they have shared experiences, or a common motivation, or maybe even a mutual friend. With that common ground to work from, they can come to accept each other over the course of the story (or at least hate each other less), and you’ll go from a dysfunctional group of misfits to a… less dysfunctional group of misfits.

Does this mean all of the members of the group have to have things in common? No. You’re totally free to have one of the characters still dislike everyone else, or to have some of the characters only connect with one other member of the group. That’s totally fine, and it’s a good way of maintaining conflict within the group while also working toward the group getting along and still making sure your readers aren’t constantly frustrated.

Intrigue and mystery is integral to a good story, and a great way to include some could be to give one of your group members a goal or motivation that’s a mystery to their companions and/or the reader. Perhaps they are not so loyal to the group as they communicated. Are they being blackmailed into doing something other than what they told the group? Are they secretly trying to get close to another member of the group? Whatever the case, hidden agendas can add another layer of interest to your cast.

Do you enjoy large casts? Are there any featured in your writing? What’s your favorite fictional group of misfits?

You can find more of R.M. Archer’s writing on her personal blog, Scribes & Archers.

3 Ways to Get More Out of Your World-Building

5 Fantasy Cliches to Avoid (and How to...

How to Write a Novel: Advice For New...

Questions to Ask Your Character in an Interview

How to Write a Tyrant

Breathe life into your characters