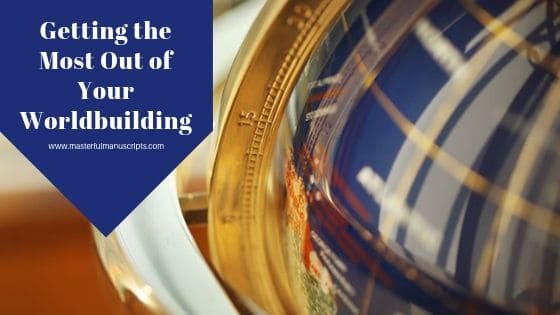 If you’re a fantasy or sci-fi author, one of the most important things for you to develop is your story’s world. While this is both fun and meaningful in its own right, your world should be more than just a backdrop for your characters’ story, and there’s so much more you can do with it. Here are a few ideas to get you started.

Are there threats unique to your world that could create serious obstacles and keep your characters from reaching their goals? Maybe your characters need to get through a jungle, but there’s a flower that grows on the trees that’s poisonous to the touch and none of them knows about it, so one of them gets sick and it sets them back. Or maybe they do know about it, but an animal attack forced them back and one of them touched it by mistake, and the only antidote is back the way they came. World-building is a great starting point for adding conflict to your story’s middle.

And that’s just minor conflicts. If you’re writing fantasy, chances are your main conflict has something to do with the world in which it’s set. In my current project calligraphers have the ability, but not the permission, to rewrite time, and when a calligrapher does rewrite time his entire guild is forced to face the anger of the ancient dragons who are responsible for keeping time undamaged. The primary conflict is entirely unique to the world, with not only the dragons but also the time-cementing ink that the calligraphers use. Not all fantasy plots are tied so closely to the world—you can put an evil overlord in just about any setting—but when the plot and world-building are so closely interwoven it’s generally more engaging for the reader.

When developing characters, think about where in your world they come from. What dreams are they likely to have, judging from the culture they grew up in? What biases will they have? How do they go with or against the grain in their surroundings? What skills would they have developed from the environment they grew up in, and how do those skills help or hinder them in the story?

A character in a culture where calligraphers are held in high esteem, for instance, may have more of a desire–or more outside pressure–to become a calligrapher than to become something that might otherwise be considered more useful, like a warrior or a tailor. Or a character raised inside a jungle might be totally lost when her family moves into a town just outside the jungle.

The world your character grows up in will have a huge impact on who they are as a person, so don’t leave it out of your considerations.

Say you have a scene that’s a conversation between two characters, and you can tell as you’re writing it that it’s turning out really flat. One of the ways you can spruce it up is by looking to your world-building for inspiration. What is the setting of the scene? What unique elements of your world could you include? Maybe it’s in a character’s office and they have a magical globe that’s distracting the main character from the conversation. Or maybe they are in a forest and there are tiny fairies flittering around in the way. Not only will these little details bring your scene to life, they’ll bring your world to life as well.

·         The Best World Building Questionnaire Ever by Hannah Truelove

Do you enjoy world-building, or do you find it a necessary evil? How have you used world-building to add to another aspect of your storytelling? What’s your favorite thing about world-building?

3 Tips for Writing an Ensemble Cast

How to Write a Character with Post-Traumatic Stress Disoder (PTSD)

5 Fantasy Cliches to Avoid (and How to...

How to Write a Novel: Advice For New...

Questions to Ask Your Character in an Interview

3 Tips for Writing an Ensemble Cast

On Writing and Worldbuilding by Timothy Hickson Giveaway

How to Write a Tyrant

Breathe life into your characters